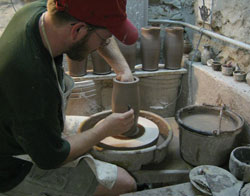 Both Eric and his wife, Laura, grew up in Michigan, but have relocated to Northern Indiana where Laura teaches elementary art and Eric works as a studio potter.

His studies began with a degree in clarinet performance from Western Michigan University. Memories of his grandfather’s studio led him to enroll in a ceramics course at the Kalamazoo Institute of Art where he discovered his love for clay.

In order to further his training, Eric apprenticed with Goshen, Indiana potter, Dick Lehman. Eric’s pottery has been featured in many invitational and juried exhibitions, as well as art fairs throughout the Midwest.

Read more about Eric’s artwork on his Artist page!